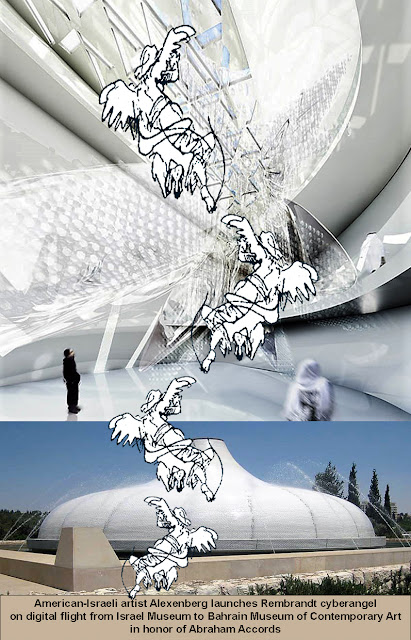 American-Israeli artist Mel Alexenberg is launching Rembrandt-inspired cyberangels of peace on flights from the Israel Museum to the Bahrain Museum of Contemporary Art.

These cyberangel flights virtually follow the first El Al flight to Manama from Ben-Gurion Airport. They honor Israel and Bahrain on their establishing peaceful and diplomatic relations that build upon the Abraham Accords signed by Bahraini Foreign Minister Al-Zayani in Washington.

Alexenberg’s digital artwork shows a cyberangel of peace ascending from the Israel Museum’s Shrine of the Book, where the oldest Bible texts are exhibited, and entering into the Bahrain Museum of Contemporary Art. It expresses a historic event of biblical proportions that heralds the emergence of a different spirit reshaping relationships between the Arab and Jewish peoples.

Four thousand years after Abraham’s sons Ishmael and Isaac came together to bury their father, their heirs came together in brotherhood on the White House lawn. Muslim foreign ministers of Bahrain and the United Arab Emirates, the Jewish prime minister of Israel, and the Christian president of the United State of America, representatives of the three Abrahamic religions launched a new era of peace in the Middle East.

Alexenberg documents the digital flights from Israel to Bahrain and the Emirates on his blog Global Tribute to Rembrandt (http://globaltributetorembrandt.blogspot.com). His blog also documents cyberangel flights from Israel to thirty museums on five continents that have his artworks in their collections. These images are augmented by texts on the impact of digital culture on contemporary art by the artist, former art professor at Columbia University, research fellow at MIT Center for Advanced Visual Studies, and professor at universities in Israel.

Mel Alexenberg's exhibition Cyberangels: Aesthetic Peace Plan for the Middle East at the Jewish Museum in Prague anticipated this historic event in Manama. It presented aesthetic values derived from Islamic art that invites a perceptual shift through which Muslims see Israel as a blessing expressing Allah’s will rather than as an alien presence in the midst of the Islamic world. His blog Aesthetic Peace (http://aestheticpeace.blogspot.com) shows how Islamic carpets symbolize a Jewish state living in peace surrounded by friendly Muslim states.

At the Sabbath eve meal, the artist and his family join Jewish families throughout the world singing, “May your coming be for peace, Angels of Peace, angels of the Exalted One.” The song begins with the words shalom aleikhem (may peace be with you). Shalom aleikhem is the traditional Hebrew greeting when people meet, akin to the Arabic greeting salam aleikum. Indeed, the word Islam itself is derived from the same root as salam (peace). May the Hebrew Malakh Shalom and the Arabic Malak Salam be recognized as one and the same Angel of Peace.

For further information and requests for interviews, contact Prof. Mel Alexenberg at melalexenberg@yahoo.com, international call +972-55-855-1223. Images to illustrate this article at Global Tribute to Rembrandt were created by Mel Alexenberg who gives permission to use them in any article based upon this press release.

Mel Alexenberg
I am an artist, educator, writer, and blogger exploring the interface between digital culture, creative process, and biblical consciousness. As an educator in USA, I was professor at Columbia University, research fellow at MIT, head of the art department at Pratt Institute, and dean at New World School of the Arts. In Israel, I taught at Bar-Ilan, Ariel and Tel Aviv universities and at Emunah College and Bezalel Academy of Arts and Design. As a writer, my books are: 'Through a Bible Lens: Biblical Insights for Smartphone Photography and Social Media,' 'Photograph God: Creating a Spiritual Blog of Your Life,' 'The Future of Art in a Postdigital Age: From Hellenistic to Hebraic Consciousness,' 'Educating Artists for the Future: Learning at the Intersections of Art, Science, Technology, and Culture' and 'Dialogic Art in a Digital World: Judaism and Contemporary Art' (in Hebrew). As an artist, my conceptual, environmental, and digital artworks have been seen by millions and are represented in the collections of more than forty museums worldwide. I live in Ra'anana, Israel, with my wife artist Miriam Benjamin. website: www.melalexenberg.com